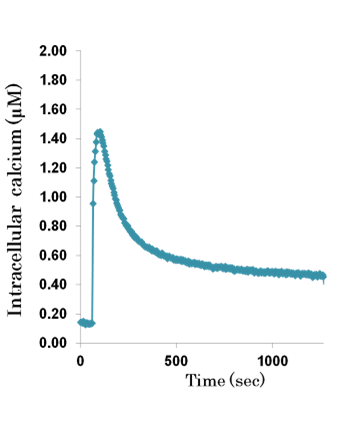 Calcium (Ca2+) homeostasis is tightly regulated in eukaryotes, where Ca2+ acts as a cellular messenger regulating a number of essential processes. Its role as a second messenger in bacteria remains elusive. We have characterized the basal level and the changes in the intracellular Ca2+ (Ca2+in) homeostasis in P. aeruginosa strain PAO1 in response to extracellular Ca2+ and membrane perturbing compounds. We have also identified several proteins responsible for Ca2+ translocation across the membrane. These transporters include F- and P-type ATPases, mechanosensitive channel, and Ca2+ leak channel.  These proteins are also required for several Ca2+-induced phenotypes, including swarming, thus supporting the role of Ca2+ as a second messenger.

More recently, we have identified and are currently characterizing two proteins: Ca2+-regulated protein, CarP, and Ca2+-binding EF hand protein, EfhP. These proteins most likely mediate two distinct pathways of Ca2+ regulation in P. aeruginosa that relate Ca2+ as an extracellular and an intracellular signal. Current work is aiming to identify the regulatory components of the Ca2+ signaling cascades and their relations with other signaling systems controlling virulence and host-pathogen interactions of P. aeruginosa.

P. aeruginosa is a facultative human pathogen and a leading cause of nosocomial infections as well as severe chronic infections in cystic fibrosis patients. It is ranked as a “superbug” due to its resistance to most antimicrobial drugs available on the market and thus represents a very difficult challenge in healthcare worldwide. This is why, a better understanding of the mechanisms of resistance and identification of new targets in P. aeruginosais critical. We have shown that the presence of Ca2+ increases P. aeruginosaresistance to polymyxins and tobramycin. The goal of this research is to elucidate the mechanisms of such induction. We have identified several multidrug efflux pumps from RND superfamily that contribute to Ca2+-enhanced tobramycin resistance and are transcriptionally regulated by Ca2+. Current work is focused on elucidating the novel mechanisms of polymyxin resistance that are regulated by Ca2+.

Abnormalities in Ca2+ homeostasis in a human body may lead to soft tissue calcification commonly associated with diseases. However, the origin and the mechanisms of such calcification remain unknown. Our hypothesis is that P. aeruginosa carbonic anhydrases (CA) are involved in CaCO3 deposition. CAs are zinc metalloenzymes catalyzing reversible hydration of CO2. Using transmission electron microscopy with X-Ray elemental analysis we detected the ability of P. aeruginosa to deposit extracellular Ca2+, which may trigger soft tissue calcification in a host and thus contribute to P. aeruginosa pathogenicity. We have characterized three β-carbonic anhydrases, two of which are induced by Ca2+ and play a major role in this deposition. Current studies focus on the role of the CAs in Ca2+-induced biofilm formation and virulence. Further studies include search for inhibitors of the CAs activities, which may lead to the development of new antimicrobial target against this pathogen.